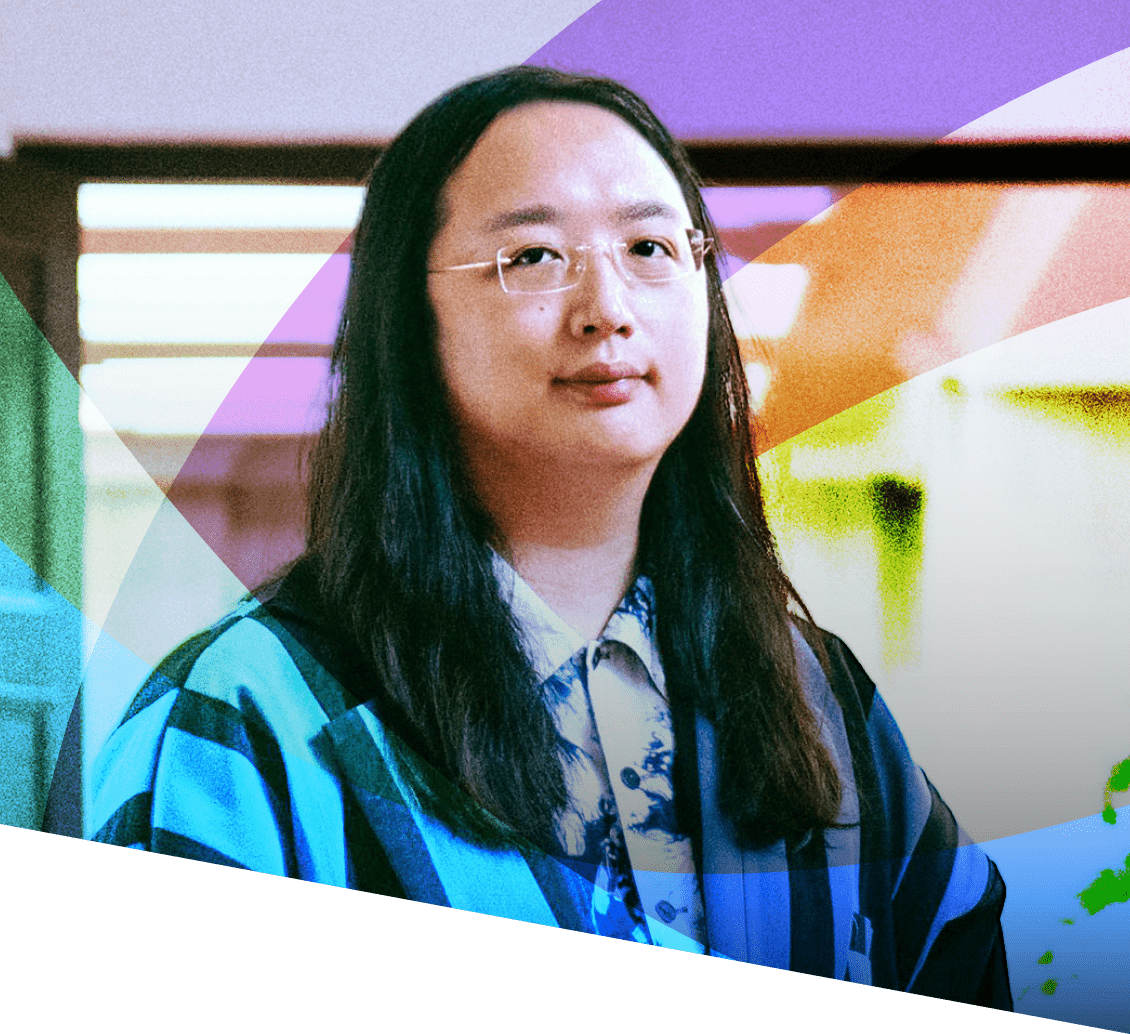 In 2020, the new coronavirus dragged the world into a whirlpool of confusion.

Amid the crisis, Audrey Tang (唐鳳) was catapulted into the global spotlight as the hope of a new Taiwan when she lead the development of a real-time “mask map” to combat the spreading infection. By instantly showing the stock levels of masks at each pharmacy plotted on the map, the map project saved Taiwanese citizens from confusion and panic-buying.

Ms. Tang is also drawing global attention for her versatility and background, including being a publicly open transgender minister, an ingenious software programmer with an IQ of 180, a hacker, and a poet.

She took up software programming at the age of eight, dropped out of middle school at 14, and started her own business at 15. She then worked as a digital advisor at Apple, where she was involved in the development of Siri, but retired from the business world at 33. At 35, she was appointed as Taiwan’s youngest ever minister.

Although a star in her own right, she is known to value working in teams, cooperating and sharing ideas with others rather than trying to accomplish everything on her own.

And she says that an essential element in her everyday life, helping her to work in harmony with others, is tea.

NewsPicks interviewed her online to explore her work philosophy.

Keeping an open mind to other people’s views

──You are known to be compassionate and accepting of others, with one of your political beliefs being “radical transparency.” Why do you value sharing information with others?

I disclose everything on the Internet, including this interview, my daily schedule, what I say in meetings, and conversations I have with visitors. For me, sharing is a significant theme.

This is because even though people around the world have different points of view, my belief is that we, in fact, share more values than we realize.

Sustainable development goals (SDGs), inclusion, and innovation, for example, are values shared by many of us in this world.

Basically, people have a positive view of these initiatives, and I’m sure very few people see them in a negative light. As an extreme example, we never hear anyone say, “Let’s destroy this planet.”

The media tend to focus on conflicts, focusing on minor differences where people can’t agree.

Everyone has their own point of view, but what’s important is to find those shared values and fit them together, like a puzzle. I want to create a transparent society in which no one is left out.

──You completed the “mask map” in only three days by getting civic hackers involved, saving the people of Taiwan from confusion over face masks. What was the key to your success?

For me, when thinking about a social innovation, it’s important to keep your mind open and take in other opinions, rather than focusing on what any individual might accomplish.

To manage a project for a large group of people, I need help from a large number of people.

For the mask map, I kept improving it by employing the ideas of people at the forefront instead of taking a top-down approach. The main key to its success was the wide engagement of citizens. Gaining the trust of the people was crucial. The government put trust in the citizens, and, in turn, the citizens reciprocated by trusting the government. The principle of rigorous transparency is one of the reasons project was a success.

Opening up the process leads to significant accomplishment

The principle of radical transparency allows us to share not only the outcome, but also the process.

With the mask map, for example, if we had shared only the final outcome of the project with the people, some kind of resistance could have occurred among the citizens because they would have had no chance of having their views incorporated in the project.

On the other hand, opening up the process lets us incorporate critical feedback along the way, which helps us create a system that will eventually produce an even better result.

Also, by opening up about the problems and difficulties we had in the process, we get to better understand one another, which also helps us get better cooperation and support.

The key is to share every step in our daily tasks with the people around us, right from the start. Getting everyone engaged helps us do great things.

With the mask map, too, sharing the purpose of the project in advance prevented resistance from citizens and helped us gain understanding and support.

──It’s not easy to understand and accept other people. How should we engage with others?

The important thing is to make the effort to understand one another.

We should leave attacking and defending behind, and turn zero-sum games into cooperative endeavors, looking for mutually recognized solutions.

By mutual recognition, I don’t mean perfect agreement. What’s needed is a rough agreement, a situation that might not leave everyone satisfied, but that everyone can accept.

There’s no winner or loser with this kind of communication. Making a world without losers is what’s important.

When we bring together people with differing opinions and fit them together, like a puzzle, we get closer that ideal style of communication.

Everyone has shared values

──How can we be more accepting of other people’s differences, as you are?

To begin with, my role is extremely clear—to help people with diverse views to find their shared values. So I think of myself as a “cultural translator.”

Once we find those shared values, new innovations can arise out of differing opinions, and we can create solutions that everyone can accept.

In that sense, rather than building organizations out of similar experiences and views, I recommend people interact with people of different generations and cultural backgrounds.

When you’re in a homogeneous community, at the end of the day you’re really just bouncing the same opinions off of one another. By interacting with people who have different points of view, you’ll start to collect some of their experiences and make them your own.

Take the mask map app, for example. While it was mainly a state-funded project run by software developers, citizen hackers helped to make it a joint project.

One side used relatively conventional software development methods, while the other used agile development. That could very well have resulted in clashes.

But even though we had differing points of view, we all shared the same values. Everyone wanted safety for citizens, everyone wanted smooth distribution of masks. These kinds of values.

Because we had shared values, we were able to recognize individuals’ strengths and assign roles on that basis. And as the “cultural translator,” I was able to promote mutual understanding and reach a rough consensus.

This allowed all parties to discover that everyone had shared values and opinions. Rather than focusing on “correct” or “incorrect” ideas, I’m convinced that understanding differing ideas leads to creativity.

──What was it that made you value mutual understanding so highly?

The internet has had a major impact on me. I logged onto the internet for the first time in 1993, when I was 12 years old.

Before the Internet, information was accumulated in sort of isolated mountains, not connected, like a mountain range.

The Internet allowed people with completely different thoughts and backgrounds to connect with each other. No form of coercive power, and no specific leaders existed.

I remember being impressed by the extreme transparency in the Internet world, which I felt was exactly the kind of thinking needed in politics. I collaborated with people online toward shared objectives without even knowing their race, nationality, age or gender, and I felt that I had found a place where I could thrive.

At the time, I was also participating in Project Gutenberg, a global initiative to provide online digitized classical books across the world, whose copyrights had expired some years after their authors had passed away.

I used to mainly read translated versions of foreign books, and although I wanted to read the originals, it was difficult to get my hands on them. That’s when I learned about Project Gutenberg. Many of their books could be downloaded free of charge, so I began to read them as e-books.

Eventually, I joined the project myself. I read tons of books, including classics, and was exposed to a variety of thoughts and experiences at no charge.

This is why I put my ideas out for free online, for future generations. I hope they can take what I have learned and make it their own.

Managing emotions with a pot of tea

──To recognize and accept others, we need time for reflection. In your busy everyday life, how do you make time to look inside?

Right, I’m only human, too. Like everyone else, I need to take time to put my thoughts in order. That’s when I brew up a pot of tea.

When I come across a nasty comment online, for example, I try blending two different varieties of tea and try out a new flavor.

The experience of trying out a new flavor sort of “overwrites” the anger in that moment. I wait for my emotions to calm down a bit, sort out my feelings, and listen to some music I’ve never heard before. Combining two kinds of tea is a small innovation that sparks imagination, I think.

──At what other times do you drink tea?

I have about 20 kinds of tea in my kitchen. I drink an energizing tea in the morning, and at night, I drink tea that helps me sleep.

I also have a habit of working 25 minutes and resting five minutes. During those 25 minutes, I concentrate on work, switching my phone to silent mode. Then, during the five-minute break, I brew some tea, drink it, and regain my calm.

This is why tea is an essential and intimate part of my everyday life.

The act of enjoying tea is a ritual for me, conditioning myself to engage in conversations with others.

In Taiwan, there are many opportunities to interact and exchange views with others over a cup of tea.

You and I are having tea together now, for example. Taiwanese people, whether politicians or everyday people, have many of our conversations are over tea.

People with different backgrounds and points of view can find their common values over tea. And when we sense a conflict coming, offering a cup of tea is a way to return to communication.

I believe that tea, like technology, is a tool for developing empathy between people.

Communication through tea helps us identify shared values. From there, people will naturally want to help one another.

Brewing and drinking tea is an act that leaves no one out. That’s the sort of society I want to build.

I look forward to having a cup of tea with the people of Japan someday.